After two months of a standstill owing to Covid-19, the football’s governing body permanently canceled the 2019-2020 term.

We have 18 clubs in the Premier League with minimum players of 30 each, coaches, administrators, 48 clubs in the Division One, medical staff, Women’s Premier League. We also have Division Two, Three and juvenile football [clubs] at the regional level,” Okraku said as reported by Football Ghana.

“We are talking about a large chunk of people who wholly rely on football as a source of living.

“We also serve as entertainment to people at the social aspect and people also use our platforms as a source of living.

“So, it is a huge decision that we had to take but we thought about Ghana first obviously, whiles we continue to engage our key stakeholder to ensure that we bring back football.”

Owing to Covid-19, football and all other contact sports remain suspended in Ghana until at least July 31 as part of measures to curb the spread of the disease.

Following the recent return of some national leagues in England, Spain, Germany and Italy, there had been calls for Ghana to follow suit.

The rising number of coronavirus infection cases in the west African country, however, left concerns about the quest for football resumption.

At the time of temporary suspension, a total of six cases had been recorded.

The present registered case is now 23,000 plus as of yesterday.

Earlier last month, the GFA revealed it was engaging the Government of Ghana over the possible resumption of football under strictly safe protocols such as playing matches behind closed doors, having had a first request rejected.

The football’s governing body was hoping to follow the template of the likes of England, Spain, Germany and Italy, who resumed domestic football after the similar temporary suspension of their national leagues due to the pandemic. – Goal.com 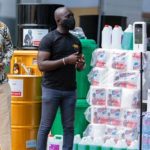